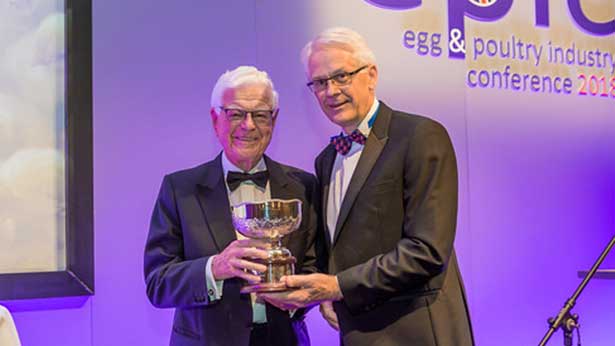 Mr Griffiths, the founder of Oaklands Farm Eggs Ltd, was presented with the award at the Eggs & Poultry Industry Conference (EPIC) on Monday, 5th November 2018 at the Celtic Manor Resort, Newport, South Wales.

This is a biennial award, in recognition of the enormous contribution made by Peter Kemp OBE to the UK egg industry over many years. Peter’s family had asked that Peter be remembered via an award presented to the person who has made an outstanding contribution to the egg industry over and above the normal call of duty within the recent past.

Commenting on his delight at receiving the honour, Mr Griffiths said, “I am deeply honoured to receive this award, especially as I had the privilege of working alongside Peter Kemp for many years, initially at Yorkshire Egg Producers and Goldenlay egg marketing organisations, and later on numerous committees and organisations working closely with the UK advisory boards and the government in London and the EU Commission in Brussels.”

Mr Griffiths also commented how he was greatly indebted to his family for giving him the opportunity to devote so much of his time and energy to working for the UK poultry industry both in Europe and on the world stage; especially to his late wife, Olwen, and his sons, Gareth and Elwyn, who have run the family business since the 1980s, his daughter and personal assistant, Lyn, and also to the late Neville Pennington, for his commitment and dedication as General Manager at Oaklands Farm Eggs.

Born in Penmaenmawr in North Wales, Mr Griffiths reared his first day-old chicks at the age of 10. Having obtained an BSc in Agriculture and a Diploma Dairying from Aberystwyth University, Mr Griffiths and his wife, Olwen, began farming in Shropshire in 1955.  They purchased The Oaklands Farm in 1969 and this became the foundation of his egg business, Oaklands Farm Eggs, the company that is run by the couple’s sons Gareth and Elwyn. Jonathan and Michael Griffiths, the third generation, are also now actively involved in the business.

Now one of Europe’s top egg producers, and utilising the latest egg industry technology, the family-run Oaklands Farm Eggs Ltd. packs over 23,800 000 eggs a week, packing one billion eggs a year between their two dedicated packing facilities in Shropshire and North Wales.

The company’s BRC ‘A’ grade, British Lion, RSPCA Assured and Organic Farmers and Growers accredited packing station in North Wales packs eggs for a wide range of retail brands, as well as its own Welsh egg lines.

A former chairman of the NFU Poultry Committee in London and the founder chairman of the British Egg Industry Council (BEIC), Mr Griffiths also served as vice president of the COPA-COGECA Poultry Working Group in Brussels.

He was awarded an OBE in 1994 for service to the poultry industry in UK and Europe, the same year he was made a Fellow of the Royal Agricultural Society (FRAgS).

Having been awarded a Nuffield Farming Scholarship in 1974, he has also been actively involved in education and research and has encouraged and assisted numerous young entrants into the egg industry, through his connections with Nuffield and also with Harper Adams University.  He was made a Fellow of Harper Adams University in 2009.

Having served the International Egg Commission (IEC) since 1985, Mr Griffiths was made an Honorary Life Member in 2012.  He was further honoured in September of this year with the international egg industry’s most prestigious award, the Denis Wellstead Memorial Trophy for The International Egg Person of the Year at the IEC conference in Kyoto, Japan.